· We Who Believe in Freedom Cannot Rest: A Radical Commencement Discussion with Naomi Jaffe and Barbara Smith

Hosted by Students Organizing Mutual Aid and Defense: A radical commencement address and discussion with lifelong activists Naomi Jaffe, who organized as a student in the late 1960s as a part of Students for a Democratic Society (SDS) and the Weather Underground, and now works with Capital Area Against Mass Incarceration (CAAMI), and Barbara Smith, co-founder of the Combahee River Collective and Kitchen Table: Women of Color Press. An interactive conversation with story-telling from Naomi and Barbara about how global political contexts as well as personal circumstances and choices have shaped their trajectories as activists, and an extended 30 minute participant discussion moderated by Sarah Fadem (they/them), who works with the Bennington College Student Union, about graduating college, and fighting for a lifetime.
Recording is forthcoming.

A renowned philanthropist and business leader, a trailblazing activist who has focused her attention on the intersections of race, class, sexuality and gender, and an award-winning journalist will address the class of 2019 at Mount Holyoke College’s 182nd Commencement on May 19, 2019. Adrienne Arsht ’63, Barbara Smith ’69 and Gary Younge will speak to the graduating class. Mount Holyoke College will also confer honorary doctorates of humane letters on all three speakers.

The world is waking up. We all feel it. On every continent, in every industry, at every level, women are raising their voices louder than ever before. The 2018 MAKERS Conference took the movement to the next level. Starting with a Time’s Up discussion and ending with Hillary Rodham Clinton streaming live from New York, MAKERS brought together today’s leading changeMAKERS to tackle issues such as sexual harassment, diversity in leadership, equal pay, and more. We are at a watershed moment in the women’s movement, when difficult but necessary conversations must take place. MAKERS is ready to lead those conversations and push the movement forward. Time’s up—and our time is NOW.

View Barbara Smith and Gloria Steinem in conversation at the 2018 MAKERS Conference. – February 6, 2018

This intergenerational panel will bring together some of the original members of the Combahee River Collective, including CRC statement co-author Barbara Smith, along with leaders of the Movement for Black Lives and #Sayhername, to talk about the history of Black feminist organizing and the impact of the Combahee River Collective statement on Black feminist praxis today.

Listen to a recording of the discussion.
Read the transcript.

· How We Get Free: Combahee River Collective Panel Discussion

Socialism 2017 is excited to announce “How We Get Free,” a panel discussion commemorating the 40th anniversary of the publication of the Combahee River Collective Statement. Panelists will include Barbara Smith and Demita Frazier, authors of the original document, as well as activists Alicia Garza, Barbara Ransby, Sharon Smith and Keeanga-Yamahtta Taylor, who will discuss the impact of the statement on the struggles of today.

Demita Frazier, Beverly Smith, and Barbara Smith were the authors of the Combahee River Collective Statement. They theorized the concept of multiple oppressions, critiquing both sexual oppression in the Black community and racism within the wider feminist movement. They sought to destroy what they felt were the related evils of capitalism, imperialism, and patriarchy.

The African American Policy Forum is pleased to announce that Scholar, Activist and Titan of Black Feminism, Barbara Smith, will receive the Harriet Tubman Lifetime Achievement Award in recognition of her exemplary work in Intersectional Social Justice. Join us in honoring Barbara Smith on Saturday June 10th for Say Her Name: 20 Years of Intersectionality in Action as we celebrate two decades of intersectional research and activism at the African American Policy Forum. 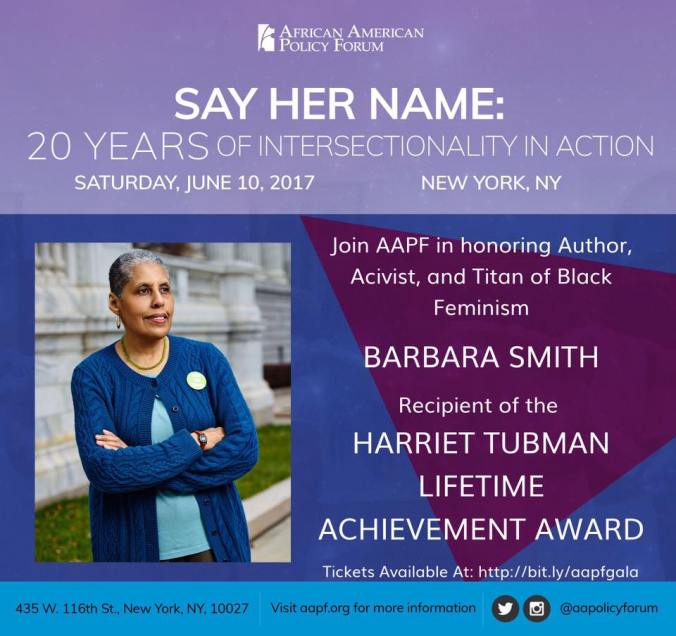 Barbara Smith will deliver a Keynote Address at the Women in Politics: A Conference Commemorating the Centennial of Women’s Suffrage in New York State.

We are seeing many examples of women’s leadership and successful organizing during this period. Albany Mayor Kathy Sheehan and Women’s Studies scholar Barbara Smith will discuss women’s participation in movements for social justice and the need to recognize the impact of race and class as well as gender and sexuality when working to make change.

The International Women’s Strike on March 8th, 2017 is an international day of action, planned and organized by women in more than 30 different countries.

In the spirit of solidarity and internationalism, in the United States March 8th will be a day of action organized by and for women who have been marginalized and silenced by decades of neoliberalism directed towards working women, women of color, Native women, disabled women, immigrant women, Muslim women, lesbian, queer and trans women.

March 8th will be the beginning of a new international feminist movement that organizes resistance not just against Trump and his misogynist policies, but also against the conditions that produced Trump, namely the decades long economic inequality, racial and sexual violence, and imperial wars abroad.

An intergenerational Dialogue on Radical Black Feminist Traditions in our Past, Present, and Futures.  Panelists include Kenyon Farrow, Reina Gossett, Barbara Smith, and Adaku Utah. 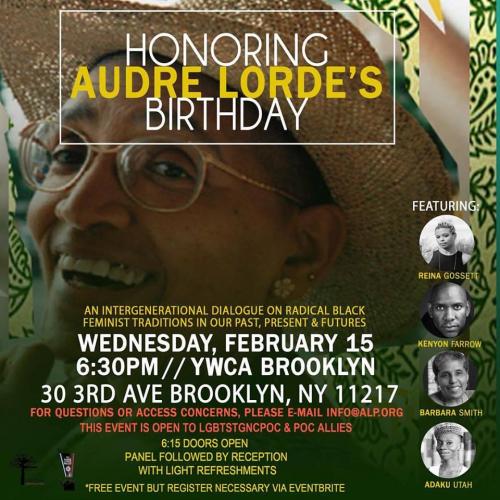 · Keynote Address – God Don’t Like Ugly and She’s Not Too Stuck on Pretty Either: Black Feminist Ethical Perspectives for These Times – February 2, 2017

Barbara will deliver the keynote address at the Williams College 2017 Claiming Williams event.

In solidarity with the Women’s March on Washington, join Citizen Action, the Capital District Coalition Against Islamophobia, and many other groups and individuals to resist Trump’s agenda and plan for a peaceful world that is
– Free of racism, Islamophobia, discrimination, mass incarceration, and war
– Welcoming to immigrants and refugees
– Supportive of women’s rights, LGBTQ rights, human rights
– Environmentally safe and free of fossil fuels
– Fair in labor practices, wages, and conditions
– Inclusive of quality education and healthcare for everyone

Barbara will be in conversation with Aislinn Pulley (Black Lives Matter Chicago), Valerie Papillon (Black Youth Project 100), Page May (We Charge Genocide), Kush Thompson (A Church Beneath the Bulldozer)

· Which Way Forward? Freedom Organizing in the Twenty-First Century – January 18, 2017 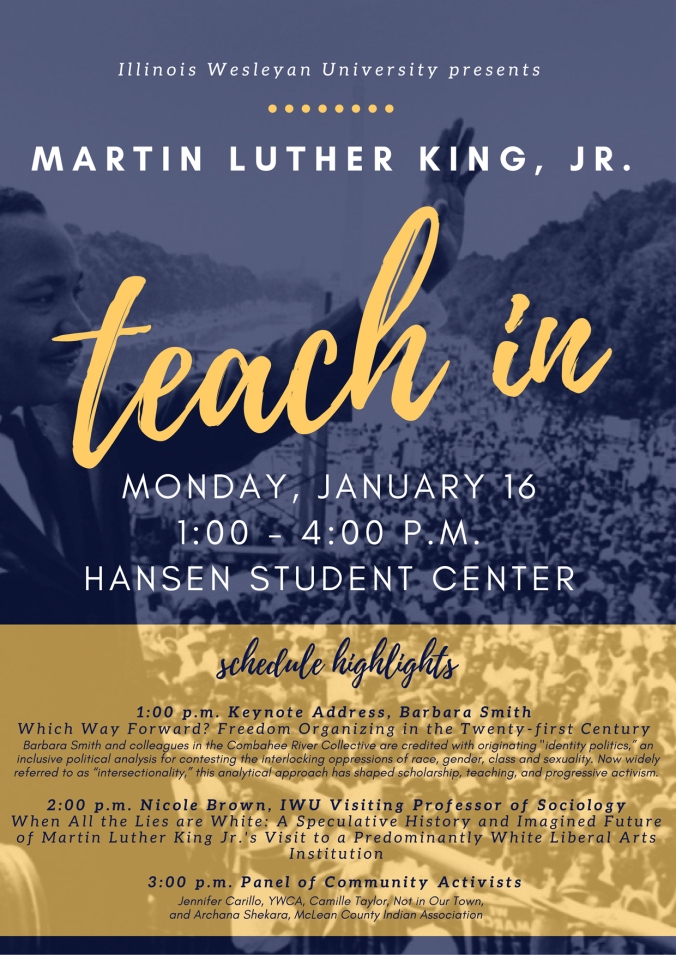 On the day after the election, Barbara will participate in a two-hour panel with a live audience at The Linda, WAMC’s Performing Arts Studio. Tickets to this event are being offered as a premium for donating during the WAMC fund drive, but everyone can listen live through a local station or at WAMC.org.

Talking about race can be uncomfortable on a number of levels. One reason is that we often do not have a shared understanding of the terms that are used when race is the topic.

Join us for guest speaker and author Barbara Smith, who is also an activist, regular panelist on WAMC Northeast Public Radio’s Round Table, and independent scholar who has played a groundbreaking role in opening up a national cultural and political dialogue about the intersections of race, class, sexuality, and gender, discusses various terms used to talk about race, for example the difference between prejudice and institutionalized racism, so that we can understand each other better and be more effective in addressing injustice.

Within their reflections, our three guest speakers will address how they respond to those persons who hold views which oppose their own.

6:00 pm to 8:00 pm ET
The Linda – WAMC’s Performing Arts Studio
339 Central Avenue
Albany NY 12206
This event is free an open to the public, but RSVP is required: www.albanydialogues.eventbrite.com

Before and after the discussion, attendees will have the opportunity to learn more about professional development opportunities and resources.  Organizations from the Capital Region will share their resources and services such as workshops, scholarships, networking events, and more.

This event is co-sponsored by WAMC Northeast Public Radio. The Democracy in Dialogue Project has been made possible in part by a major grant from the National Endowment for the Humanities. Follow the conversation on Twitter using #NYDialogues.

Join Barbara Smith and Cecile Richards as they kick off the Planned Parenthood Women’s Leadership Circle. Tickets are available in advance.

· INFORUM and SF Pride Presents Black Lives Matter + the LGBTQI Community Forum – June 20 2016
A recording of this event is available at bit.ly/28ZrekL.

Join INFORUM of Commonwealth Club and SF Pride for a celebration of San Francisco’s LGBT history and a powerful discussion about SF Pride’s theme “For Racial and Economic Justice.” The panelists will also touch on how this year’s organizational Grand Marshal Black Lives Matter have impacted the LGBTQI community.

Darnell Moore, Senior Correspondent at Mic, Co-Managing/Editor at The Feminist Wire and writer-in-residence at the Center on African American Religion, Sexual Politics and Social Justice at Columbia University.

Aria Sa’id serves as Programs Director for the St. James Infirmary- a peer based occupational health and safety clinic for sex workers and their families in San Francisco. In addition, she has previously worked with the Center of Excellence for Transgender Health at the UCSF Department of Medicine in research that seeks to advance transgender women of color’s access to health and wellness. With her blog, “Trans Sex in the City,”, she writes in more detail on her experiences with intimacy, engaging in sex work, and being a cosmopolitan vixen. 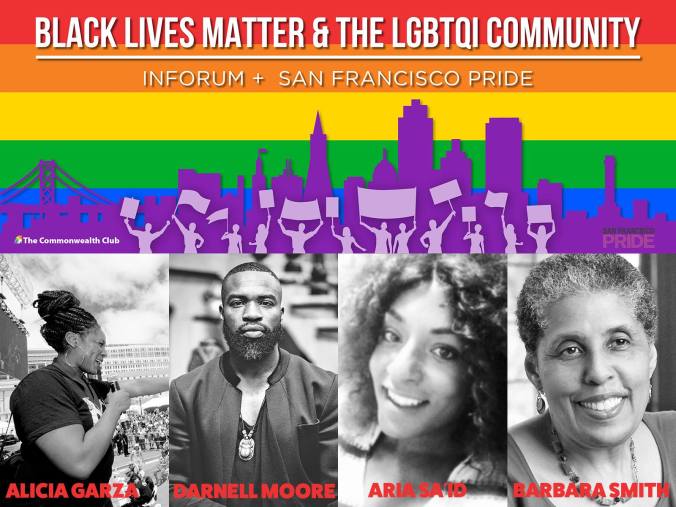 8:00pm ET
Barbara Smith joins a national call with Women for Bernie. Join the call on Friday, April 22 at 8:00 pm ET with opening remarks by Jane Sanders, and special guests Ohio State Senator Nina Turner, Linda Sarsour, and Barbara Smith about women’s rights in this election. Senator Turner, former state senator and minority whip of Ohio, will be having a conversation about a wide variety of women’s issues with Linda Sarsour, Arab American Association of New York Executive Director, which will be moderated by Barbara Smith, renowned Black feminist scholar, long-time activist, member of the LGBTQ community, and 2005 Nobel Peace Prize nominee. There will also be a Q&A!
Event link: https://go.berniesanders.com/page/s/national-women-call
Facebook link: https://www.facebook.com/events/594015450763092/

· Inside the Continuum: The Combahee River Collective and Black Feminist Foundations – March 25, 2016   (Combahee panel begins at 4:13:50 in the linked video.)

3:00pm – 5:30pm ET
Student Union Ballroom
University of Massachusetts-Amherst
Campus Center, Room 163C
On March 25, 2016, the University of Massachusetts-Amherst hosted the first ever Combahee River Collective reunion. A panel titled Inside the Continuum: The Combahee River Collective and Black Feminist Foundations was included as part of Feminist Poetics: Legacies of June Jordan, a symposium celebrating the work of feminist poet, scholar and activist June Jordan, and her legacies in contemporary feminist poetics. The event was live-streamed for a national audience.

7:00pm ET
200 Milne Hall, Downtown Campus,135 Western Avenue, Albany NY12203
Rockefeller College, the New York State Writers Institute and SUNY Press invite you to a celebration of the life and work of influential activist Barbara Smith. We’ll begin the evening with a panel discussion moderated by Susan Arbetter of The Capitol Pressroom, featuring Barbara with Alethia Jones and Virginia Eubanks, editors of Ain’t Gonna Let Nobody Turn Me Around: Forty Years of Movement Building with Barbara Smith. Immediately following the discussion, there will be a dessert reception and book signing with Barbara. Please RSVP by clicking on the flyer below to let us know you’ll be there.

Barbara Smith argues that “identity politics”— rather than presenting an obstacle to forming coalitions for social and economic justice – offer an essential foundation for such coalitions. Drawing on forty years of work with civil rights, feminist, LGBTQ and other movements, Smith’s new book, Ain’t Gonna Let Nobody Turn Me Around, edited by Alethia Jones and Virginia Eubanks, poses an urgent set of related questions that Barbara and forum panelists will consider.

· Book Launch at The University Club of Albany: Tuesday, November 18, 2014

6:00pm – 9:00pm ET
141 Washington Avenue, Albany NY 12210
Join us for a reception, panel discussion, and a book signing. The panel will include Barbara Smith and Virginia Eubanks, who co-edited the book with Alethia Jones, and will be moderated by Elaine Houston, anchor of WNYT NewsChannel 13 Live at 5:30 and “Today’s Woman” reporter. 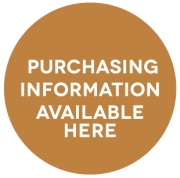